After the 2015 season I was looking forward to a great 2016 with lots of exciting things happening but I never considered injuries and crashes to be part of the plan. A lot has happened so far in 2016 and it's not something that I'm jumping with joy to put in to words and share on my blog!!

Tuesday January 19th 2016: I completed a Terrific Tuesday of training; 90 minute swim (hitting target times), 8 x 1km reps (first real speed session and my best splits at this time of the season compared to prior seasons), hard bike 2.5hr session with criterium and hill reps. I felt smashed by the end but so strong throughout and knew I was coming into good form, and ready to get stuck into speed work.

Saturday 23rd January 2016: I finished a run early because of a slight discomfort and ache in my left mid-foot continued, and by the afternoon my foot felt stiff and sore to walk on (cue mild panic).

Monday 25th - Thursday 28th January 2016: A series of physio, sports doctor appointments and an MRI to identify what I was dealing with. Prognosis; a stress reaction in my navicular bone. Not worst case scenario which would be a stress fracture but not far from it. It did however feel like the worst timing with not long until the final Olympic selection races. There was the time to throw my toys, cry, get angry and then get over it and focus on my recovery. While this included three weeks in a moon boot, I could still swim and bike to my heart's content. I focused on this positive, I could still keep my fitness, three week's wasn't that long and I could aqua jog in the meantime. At least I wouldn't be in a cast for eight weeks so it was lucky I caught it before it progressed to a stress fracture. It did mean I had to pull out of my first two planned races, Kinloch and Takapuna. These fixtures have been the start to my season for the last four seasons, so was weird to miss out on them. In the bigger picture the aim was to be peaking for Gold Coast and Yokohama World Triathlon Series in April and May.

Wednesday 10th February 2016: Two weeks on from the prognosis and everything was tracking along well, I was doing a big volume of cycling and swimming. It was amazing how less fatigued I was without running in my program and could do lots of quality swimming and cycling.

Thursday 11th February 2016: A day I wouldn't wish on anyone! Around 10.30 am while midway through a 2 hour cycle with a group of five other cyclists, I hit a speed bump (quite literally) - while cycling down a hill at around 50km/hr. Due to a combination of a dip in the road and me changing handlebar position I skyrocketed through the air and dived into the pavement. This happened before I could really register it, I just remembered flying and then a searing pain in my face. The scariest thing was the amount of blood I was expelling (lots of blood vessels in your face = a lot of blood). Usually one of my first reactions would be to get up quickly and access how I was feeling. I knew this was no ordinary crash however and a lot of thoughts were swirling in my head (what have I done?, am I losing too much blood? I think I need to go to hospital?). Luckily I had a great team (thanks Barbara Watson) around me who jumped into action (stopping traffic, laying me in recovery position, checking my pulse, putting a blanket on me) and a kind lady from a nearby house who ran out with towels and blankets. The thirty minute wait for the ambulance seemed like forever and at times my face was so sore I thought I might pass out. All the mental training for races does come in handy in these situations as I found ways to deal with the pain. The ambulance ride after being pumped with morphine, the time spent in hospital and recovering feels like a bad dream when you have recovered but something I will never forget. 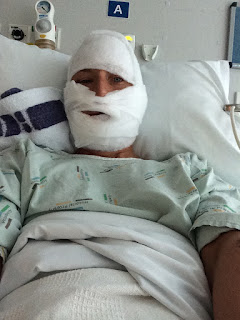 I've broken bones, crashed before, had shock wave therapy, needles, but nothing comes close to having local aesthetic in open wounds on your face. Confirmation from head CT and X-rays luckily showed no internal damage and the main impact from the crash was the lacerations in my face and possible damage to a small nerve near my lip. I was in surgery for an hour and half as a plastic surgeon sewed these lacerations together. I was pretty out of it the next few days from the general anesthetic and the painkillers I was on. After two days I was ready to leave the hospital and the next week was slow going. There were lots of doubts in my head (will I want to cycle, can I swim/cycle with these wounds). I looked like a walking accident with my moon boot, and my stitches which meant I preferred to stay indoors. It's amazing the little things you focus on - able to shower by myself, cook a meal and the first twenty minute walk to the beach and back. I bounced back well though, and 36 hours after my stitches were out I was on the windtrainer! I wasn't able to swim yet, and couldn't run so go figure the one thing that caused this I could do!! Two weeks later the wounds were sufficiently healed to go back in the water. To say I was nervous on my first outdoor cycle would be an understatement but I knew it was a case of persevering and I would get my confidence back.


Thursday 17th March 2016: Five weeks on from the crash and I'm back in full training. I've done 100 km cycles, a couple of ocean swim races and feel fit and healthy. I've been progressively loading my foot on the alter gravity treadmill (a machine which lowers your body weight using air pressure). I'm disappointed not to be able to race this weekend at the Gisborne Oceania Triathlon Championships, as I would have loved to improve on my 4th place at Oceania Champs last year and also the surf swim! I'm excited to return to racing in a few weeks at New Plymouth World Cup, a sprint distance which will be a good tester of where I am at. Following that I plan to be toeing the line at Gold Coast and Yokohama World Triathlon Series. Yokohama is the last qualifying race for the Rio Olympics and while it's not been the ideal build up, I will be giving it my best shot.
I want to say a huge thanks to everyone who sent lovely messages, flowers, visited me and supported me through the tough days post the crash. I felt really overwhelmed by the support of amazing friends and those in the triathlon community. Thanks to my coach, Stephen Farrell for the confidence in me to get back training, my sponsors for continued support; Blue Seventy, Fit For Fun, Triathlete's Corner, PRV, Cervelo, and the team at Sports Lab for looking after me. The biggest thanks goes to my parents, sorry for giving you one heal of a shock and scaring my Mum especially, more than myself. Thanks for being there every step of the way and looking after me.

Barely getting off the ground from the first speed bump (foot injury) before being knocked down again with the crash has been the toughest challenge so far of my triathlon career but one I feel I have faced head on. You learn a lot more about yourself when facing these challenges and how resilient you can be. An appropriate quote to finish with is "It's not whether you get knocked down, it's whether you get up".